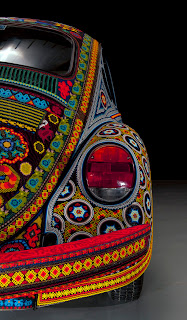 Unique glass seed bead design
h u i c h o l   A R T   O N   W H E E L S
Vochol®also embodies an unprecedented event in the history of popular art in Mexico and, indeed, in the world: two families of Huichol artisans from the states of Nayarit and Jalisco in Mexico took as their canvas the real chassis of an automobile and produced an exclusive design using glass seed beads as their medium.
The Asociación de Amigos del Museo de Arte Popular or AAMAP (The Association of Friends of the Museum of Popular Art), together with the support of the Governments of the States of Nayarit and Jalisco, as well as various public and private institutions, made this project – more than one year in the making – a reality.
The Huichol artisans began the Vochol®intervention in May of 2010 at the Cabañas Hospice in Guadalajara, Jalisco, and continued their work at the State Center for Popular and Indigenous Cultures in the state of Nayarit.
Following 9 thousand 408 hours of work over a seven-month period, and the use of 2 million glass seed beads –equal to 90 kilograms–, 16 kilograms of special resin, fabric, paint and yarn, as well as the creative inspiration of the Wixarikas (Huicholes from the Central West of Mexico), the car arrived at the Museum of Popular Art (MAP), where the finishing touches were added.
This is truly an unprecedented work, one that embodies the ethos of a culture that sees the world through a polychromatic glass, a culture that knows how to fuse that which is real and that which is imaginary. It bespeaks the spectacular wonders of popular art in Mexico.
The convergence of design and color offer the ideal opportunity to become tightly intertwined with a culture of rites, dexterity and sensitivity, resulting in a veritable explosion of originality and colorful beauty.
Following its exhibit period at the MAP, Vochol® will leave on a promotional tour, to ultimately be auctioned internationally. All proceeds will be donated to the AAMAP, allowing the Association to continue upholding its objective of promoting the work of some eight million persons involved in the creation of popular art in Mexico.
These actions exemplify what can be achieved through joining efforts and willpower, and thus benefit the men and women artisans of Mexico.
Interested viewers may visit the official website www.vochol.org.mx, as well as AAMAP’s popular blog http://amigosmap.blogspot.com
Huichol culture
Surviving annihilation and spiritual conquest, the Huichol people are the remnant of the purest of indigenous races. They have become the repository for the tradition and origin that they have carefully preserved over the centuries.
The Huichol continue to worship their ancestral gods, their sacred and powerful peyote, the sun god, the deer god, and the corn god, the father and lord of all signs, hallucinations and the begetter of life and death.
They have now settled in the Western Sierra Madre, primarily in the region comprising the states of Jalisco and Nayarit, as well as part of the states of Durango, Colima and Zacatecas.
The Huichol have for many generations been outstanding embroiderers, and great shamans and tellers of myths and tales. They retain strong links and connections to their natural environment – the means to establishing contact with their ancestral deities.
Perhaps they are the greatest pilgrims the world has ever seen. They feel the need to reconstruct the creative deeds of their gods at the sites where these took place, traveling for four or five months at a time to distant places such as the Chapala Lake, the sea and the magical land of the Wirikuta people, home to peyote.
Enigmatic in its beauty, Huichol art hides unexpected symbols in its designs, techniques and materials, transporting us to a universe in which every creation takes on cosmogonic qualities.
The Huichol people have gained international renown, thanks to their fine embroidery work and woven textiles, to their ritual objects, and especially their stone sculptures, votive arrows and calabashes decorated with glass seed beads.
AAMAP/VA/EO
Oh Huichol, you who are renowned in the domains of your tribe,
proud of the freedom and limpidness of your race…
a man who has stopped time in his surroundings
as his reed flute echoes
under the eaves of his hut.
ASSOCIATION OF FRIENDS OF THE MUSEUM OF POPULAR ART
CONTACT US: amigosdelmap@gmail.com