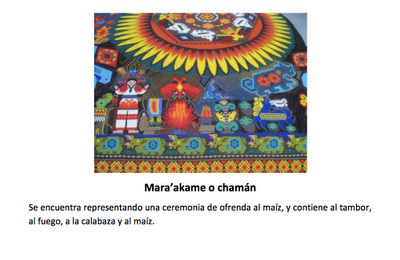 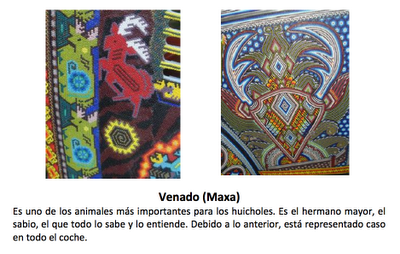 Deer (Maxa)
The deer is one of the most important animals in Huichol culture.  The deer is the older brother, the wiser brother, and one who knows all and understands all.  Because of these attributes, the deer can be found at points all over the car. 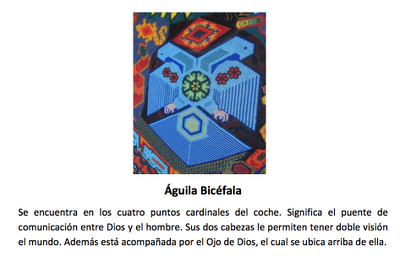 Two-headed Eagle
The double-headed eagle can be found at the four cardinal points of the car.  It symbolizes the communication bridge between God and man.  The eagle’s two heads allow it to have double vision over the world.  In addition, the eagle is accompanied by the talismanic Ojo de Dios immediately above it. 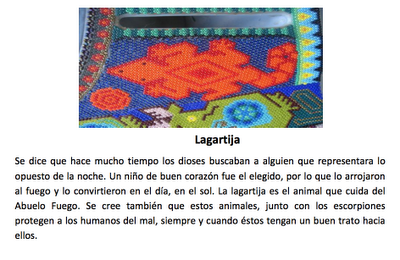 Lizard
It is said that in many years ago, the Gods were searching for someone to represent the opposite of night.  A child with a good heart was chosen.  He was thrown into the fire and converted into the day, into the sun.  The lizard is the animal that takes care of Grandfather Fire.  The Huichol also believe that lizards, together with scorpions, protect humans from evil.  However, they only protect when humans have been good to them. The Offering
This scene represents an offering to the flood.  According to Huichol tradition, there was a flood many years ago in Lake Chapala, Jalisco.  The boat depicted in this scene is full of seeds — maize seeds, bean seeds and more.  A Huichol woman at one of the cardinal points caries a gourd to collect these seeds. 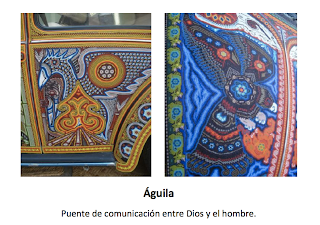 Eagle
The eagle is a symbol of the communication link between God and man. 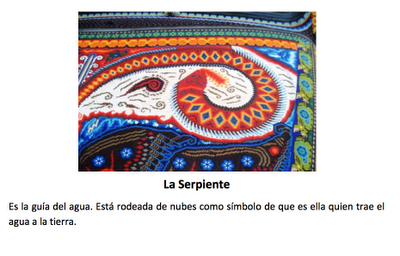 The Snake
The snake guides water.  The clouds that surround her symbolize that it is she, the snake, who brings water to the earth. 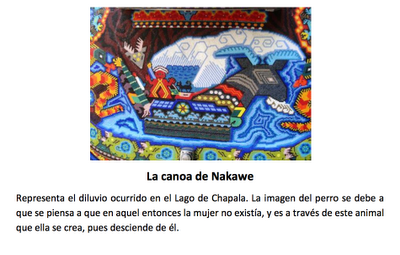 The Nakawe Canoe
The canoe and the scene around it represent, once again, the flood that occurred at Lake Chapala.  The image of a dog in this scene reminds us that in ancient times, the woman did not exist.  She is created out of a dog.  She is a descendant of the dog.VERSION EN ESPAÑOL: http://amigosmap.blogspot.com/2011/01/simbologia-huichol.html